Valve is not tight

When a wheel loses air, users often assume it is because of the valve. The reasons for leaking air can be many though: between tire/rim, rim/tape and rim/valve or within the valve. Only in very few cases it is actually the valve losing air.

If the sealant is not sealing the gap between the rim tape and the rim you might have to re-install rim tape and make sure it sits perfectly tight.

Leaking valve cores are very rare, so you might want to look for other sources of leakage first. To be sure it is the valve core losing air, apply soapy water to the valve and see where bubbles appear (by the valve core or between valve nut and rim).

Air leaking between rim and valve

If you are sure the air is lost between the valve and the rim/tape, you can try the following to seal the remaining small gap:

I can't measure the tire pressure

Depending on the pressure measuring device used, the knurled nut of the valve core might not be pushed all the way down to open the rubber flaps

I can't release air from my tire

Rubber flaps are not pushed open by the valve core extension.

Valve is not tight without valve core installed

After measuring/refilling when retracting the applicator needle, some air might leak through the rubber flaps.

No worry, this is normal. You still have enough time to install the valve core without losing a lot of air. By pushing the valve core curled knob / valve core extension the rubber flaps can be “re-aligned” so they close better.

Plunger is ejected from syringe

Plunger shoots out of syringe when opening the sealant regulator valve.

Open sealant regulator valve slowly (!) and be ready to close it quickly. The plunger moves a lot faster when no sealant is in the tire anymore (only air flow). You don’t have to hold the plunger when extracting sealant from the tire.

Residues of any kind (for example mold release agent from manufacturing process) may influence the efficiency of the sealant if not fully removed. First, wash the inside of your tire properly, let it dry and wipe it afterwards with a residue remover (eg rubbing alcohol) that was approved from the tire manufacturer. This assures, that the tire is free from oil, dirt, other sealants, or residues. Due to rubber porosity, it is normal that new tires absorb some sealant within the first few rides, you will need to check the sealant level after a week or two and add more sealant if required.

Leave applicator needle in the valve/tire to refill the syringe.

After the sealant has been pushed into the syringe by the tire pressure you can disconnect the syringe from the (closed) sealant regulator valve. Tip: pull the plunger slightly before disconnecting the syringe to create a negative pressure: no drop of sealant is spilled this way.

After the sealant has been pushed into the syringe by the tire pressure, you can disconnect the syringe from the (closed) sealant regulator valve. Tip: pull the plunger slightly before disconnecting the syringe to create a negative pressure: no drop of sealant is spilled this way.

Wrap paper tissue around the milKit needle when retracting it from valve.

Use sealant for tightening if air is leaking between valve and rim.

Don’t tighten the valve nut more than hand tight if there is air leaking between the valve and the rim. Use the sealant to seal the small gap. Rotate wheel sideways (perpendicular to rolling direction) so sealant flows along tire wall to the valve (as described above).

Remove the plunger from the syringe barrel in case rinsing won’t fully clean your syringe.

The new milKit syringes with the reinforcement ring make removing the plunger a bit trickier but by applying a lateral twist, the plunger can still be easily removed: 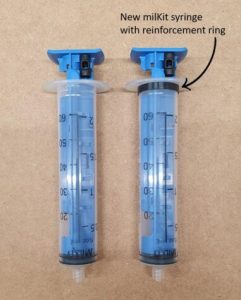